Steve Chapman: go forth and be wonky 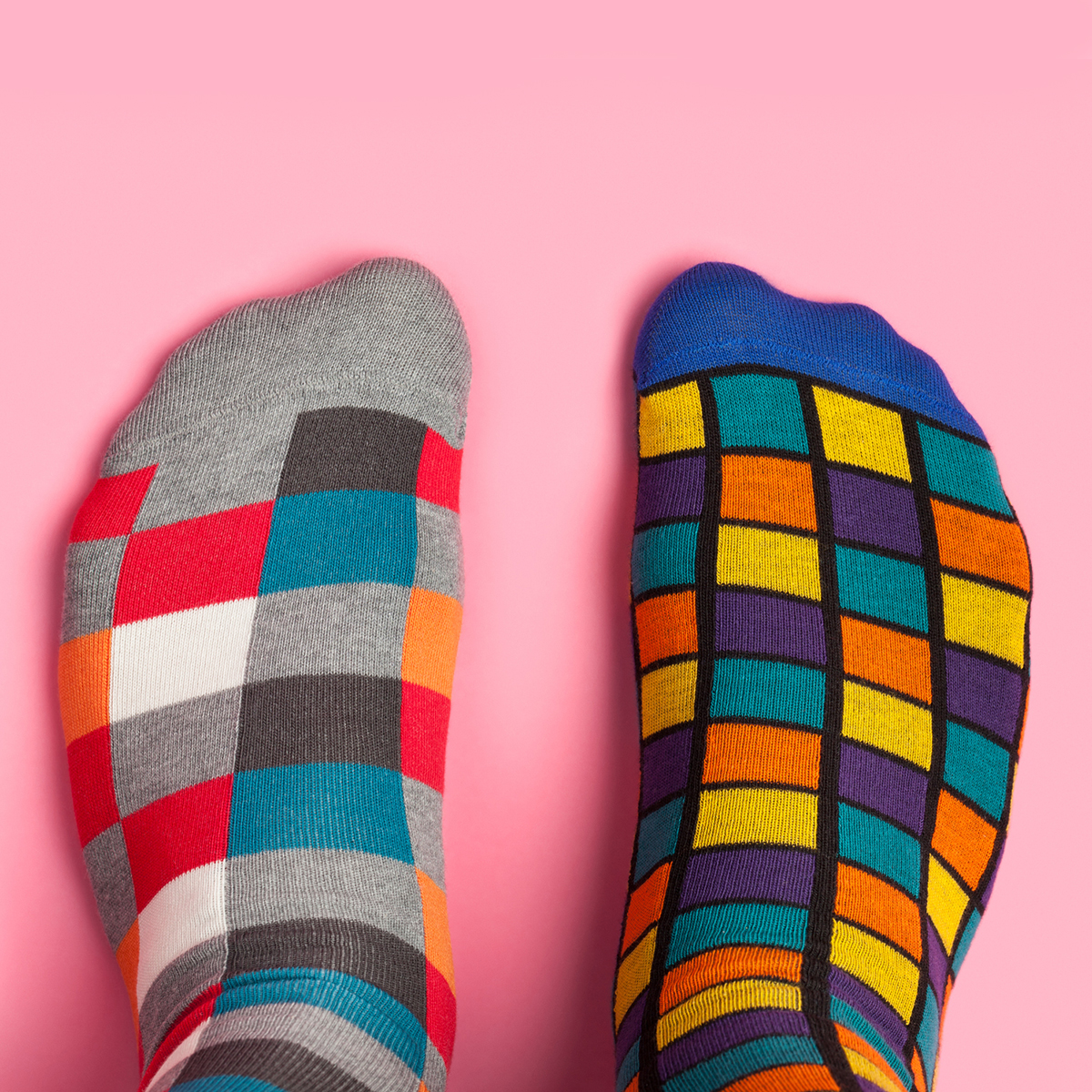 Deﬁned as 'not belonging to or coming from within a particular group', the term ‘Outsider’ is an adjective used by artist and philosopher Steve Chapman to describe the cathartic feeling of 'wonkiness', the profound ability to be an expert in ‘in-expertise’ and the importance of embracing the creative weirdness that resides within each and every one of us.

Chapman recently gave a thought-provoking Vision Keynote; ‘You're Beautiful Wonkiness’, where he talked about the rise of the outsider and prompted a revolution towards ‘non-sense’.

During the keynote, he argued that in a generation of formulaic innovation and a society that is driven by stability, it is vital that we take time to break free of our own expectations, explore our uncertainties and embrace the ‘non-sense’. Specialising in creative methods that can help individuals and organisations free themselves from the loops of common sense, where creativity and change are rather difficult, he has kickstarted a subversive movement of creative uncertainty. Whether it’s a silent podcast or a collection of imperfect portraits in Trafalgar Square, he has produced a plethora of projects that have laughed in the face of conformity and championed the ‘in-expertise’ of being unapologetically wonky.

In this context, Chapman describes the term ‘wonkiness’ as a positive endearment, an attempt at a task with no training or proﬁciency, picking up a new instrument with good intentions and ending with a terrible outcome. Since reaching what he described as “peak wonkiness” in 1984, he has derived a few methods of igniting your own creative 'outsider'.

We’ve picked out our favourites below:

Dance with your Demons

The ﬁrst step to ‘wonkiness’ is without doubt the hardest. In order to progress along the ﬁgurative road to ‘non-sense'. Chapman believes it is imperative you attempt to remove the boundaries that your inner critic has assembled. By listening to the voice that screams, “I wouldn’t do that if I were you!” you are inadvertently becoming your own worst enemy. However, by choosing to provoke your inner-demons, you will ﬁnd that your way of thinking will drastically improve. This in turn will prove to your pessimistic inner voice that formulaic ways of thinking are not always deﬁnitive routes to success. 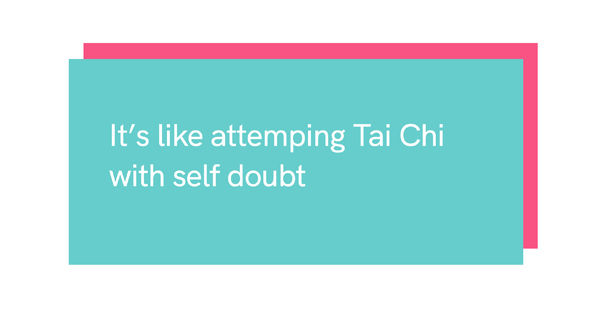 To confront his own demons, Chapman began drawing them, picturing them alongside each of his uncertain creative decisions. This constructive idea later evolved into building a life-size model, a terrifying mask and puppet of his inner critic, which he then began to perform with during his keynotes. This unusual method allowed him to break free of the corporate world and pursue his creative visions with renewed vigour. So, before you attempt your own ‘wonky’ contributions, get to know your demons and grow from them - 'outsiders' don’t need permission from anyone.

The Sweet Spot of Discomfort

Finding the right mix of reason and originality within ‘in-expertise’ is a slippery slope, one that often is extinguished before any progress is made. However, after experiencing his own last-minute doubts before the release of a project, Chapman has produced a fool-proof plan for achieving gratifying 'wonkiness': 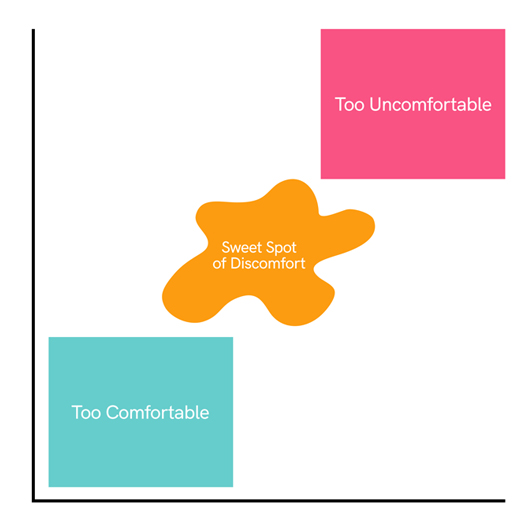 This simple graph is a representation of our moral limitations. Using one of his art projects as an example, he explained ‘Too Comfortable’ was a connotation of what we can easily achieve e.g. posting photos to his Instagram. On the other hand, ‘Too Uncomfortable’ personiﬁes what he believes to be morally wrong or potentially harmful to his vision e.g. dispersing his artwork using Graffiti.

The ‘Sweet Spot of Discomfort’ is an accumulation of both. Having established that Instagram was becoming a less valued outlet for his creativity and that widespread Graffiti could risk legal problems, Chapman needed a new approach. Under the hashtag #freeart, he designed, painted and abandoned little pieces of art around London to showcase his work in a legal manner. This visual method avoided the simplicity of Instagram and did not break his moral code of permanently vandalising properties, placing both his conscience and work perfectly between his range of comfort and discomfort.

The message that Chapman took away from this particular example is that pushing the limits of his 'wonkiness' by going outside of his comfort zone, taking risks and embracing the unfamiliar were incredibly positive. He found his metaphorical sweet spot, an area of productivity that not only improved his capabilities, but confidence as well.

Hang out with Weirdos

Every day we meet new people, each person is entirely unique and carrying knowledge or experience that we may never encounter ourselves. Whether these are friends, colleagues, family or complete strangers, each individual you interact with has the opportunity to inﬂuence you in ways you might not have considered. 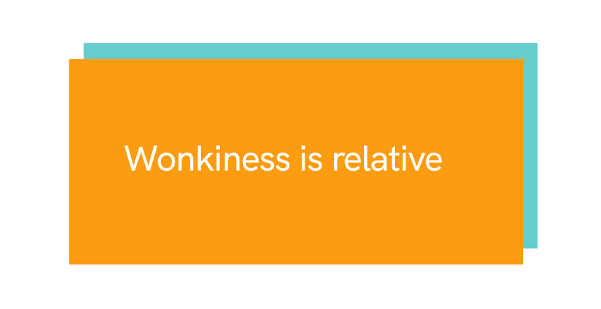 To help reﬁne his own ‘wonky’ qualities, Chapman ensures that those closest to him share a similar mindset to his own. What makes a person ‘wonky’ is entirely relative. Therefore, you may interpret its meaning and definition very differently to your neighbour. However, surrounding yourself with your own chosen tribe of ‘outsiders’ and creative minds might be exactly what you need to begin your journey down the road to ‘non-sense’. Not only will these people challenge your opinions, they will encourage growth, bring a new-found conﬁdence to your work and prompt collaborative approaches to any new ideas.

"In an expert’s mind there are few opportunities, in a beginner's mind there are inﬁnite." After listening to Chapman’s keynote, this quote has never rung so true for me. Highlighting our society's ability to push us between who we naturally are and who we feel we should be, he shows us how to confront our limitations and make peace with our inner-critics, tasks that we may previously have considered trivial. 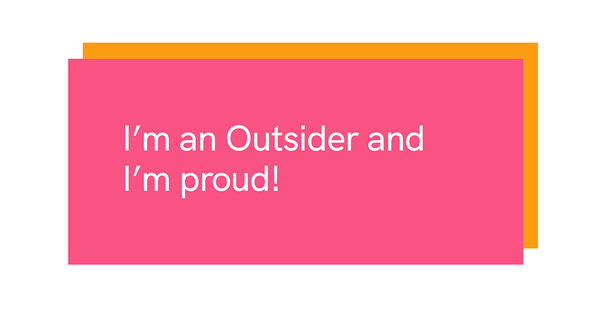 In order to succeed in any industry, structure and familiarity are considered necessities. If we dare to approach innovation from a different perspective, tilt the platform per-say, the risk of rejection becomes all the more likely. However, what Chapman has proposed is now beginning to alter our perception of the predictable. As a society that supposedly thrives off diversity, being told to avoid your true-self and to restrict your capabilities to pre-conceived notions of ordinary can seem contradictory. Embracing the unknown and unapologetically challenging your own opinions may feel near-impossible, but with the right mindset, these skills can become the deﬁning factors of your person.

So, in order to put a pause on the conventional, before you approach that document you’ve been sidelining for weeks, that big presentation that doesn’t quite hit the mark or the report you can’t quite finish, maybe take a step back and ask yourself, are you encouraging the weird and wonderful? Hitting that sweet spot of discomfort? If not, don’t panic, you’ve got time - the uprising of 'wonkiness' is only just beginning.